Laurent Clerc arrived with Gallaudet in 1816 and shared his knowledge of LSF which influenced ASL.
Permalink |  Email this Guide
https://infoguides.rit.edu/prf.php?account_id=43304
Last Updated: Sep 17, 2021 11:23 AM 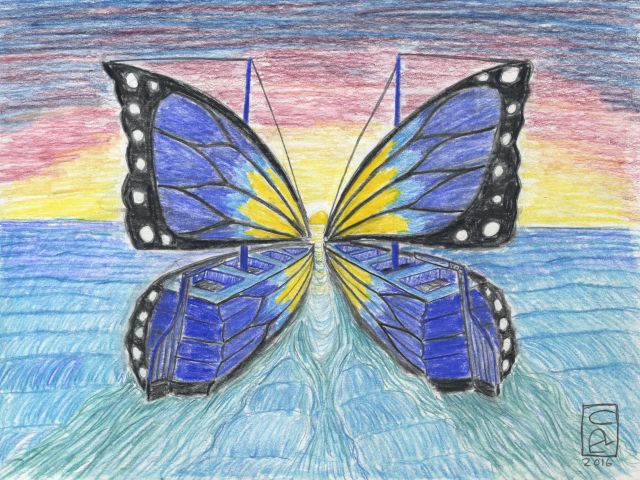 Copyrighted Image at left: "The Great Convergence" by David Call, 2016. Original in RIT/NTID Deaf Studies Archive. Description: The sailboat from France carrying Langue des Signes Française (LSF) met up with another sailboat carrying Martha’s Vineyard sign language (MVSL). A beautiful convergence had happened when the boats met together and went on to the American mainland where American Sign Language (ASL) was born.

Use the Gallaudet Encyclopedia and The Sage Encyclopedia of Deaf Studies to find more information about Laurent Clerc and his influence on American Sign Language history. Laurent Clerc and Thomas H. Gallaudet took a boat voyage on June 18, 1816, for 52 days to help found the American School for the Deaf (ASD) in 1817. While they were on the boat, Gallaudet taught Clerc written English and Clerc taught Gallaudet French Sign Language or Langue des Signes Française (LSF). Clerc kept a diary to practice his English skills.

Clerc used LSF at ASD which influenced the development of American Sign Language (ASL). There are other influences on ASL, such as the signing Deaf and hearing community at Martha's Vineyard who used Martha Vineyard Sign Language (MVSL). This community migrated from Weald-Kent, England in the 17th century due to economic necessity and religious freedom. The Weald-Kent area used a regional dialect of British Sign Language (BSL) called Old Kentish Sign Language (OKSL) because there were deaf members in the community due to genetic deafness. John Lothrop sailed on the Hercules ship with a congregation of two hundred members to the New World and landed in Boston in 1634 and assume they brought their sign language with them. They settled in Scituate and then moved to Barnstable and Edgartown. Later, small groups moved to Chilmark on Martha's Vineyard.

Jonathan Lambert was the first Deaf person to settle in Chilmark in 1692. He had a hearing wife and seven children of whom two were deaf. The friendly Wampanoag Indian tribe lived in this area and sold cheap land to Jonathan. It is possible the settlers used Indian Sign Language with the tribe, which might have influenced MVSL, along with Kent Sign Language. Deaf children from Martha's Vineyard (the largest group of Deaf students from a geographical area) attended ASD and mingled with the mainland school community using MVSL which influenced ASL. Martha's Vineyard Deaf students attended ASD for approximately 100 years.