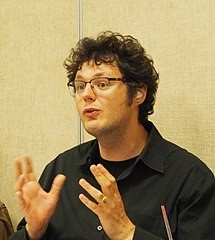 The photograph at left is By Slowking4 - Own work, GFDL 1.2. It shows Ilya reading at Split This Rock 2018, Washington, D.C.

"Kaminsky, a hard-of-hearing Ukrainian-American poet, critic, translator, and professor, is best known for his poetry collections, including Deaf Republic, Traveling Musicians, and Dancing in Odessa, which have earned him several awards. In 2019, the BBC named him among “12 artists who changed the world,” with Deaf Republic named a finalist for the National Book Association’s National Book Award for Poetry. At age 4, he lost most of his hearing after a doctor misdiagnosed mumps as a cold. His family was granted political asylum by the United States in 1993 and settled in Rochester.

He went on to earn a bachelor’s degree in political science from Georgetown University and a Juris doctor at the University of California’s Hastings College of the Law. He is also co-founder of Poets for Peace, which sponsors poetry readings worldwide to support relief work. Kaminsky’s honors include a Whiting Writers’ Award, the Milton Center’s Award for Excellence in Writing, the Florence Kahn Memorial Award, Poetry magazine’s Levinson Prize and Ruth Lilly Fellowship, Philips Exeter Academy’s George Bennett Fellowship, a Lannan Foundation fellowship, and an Academy of American Poets fellowship."

Currently, Kaminsky works as a Professor, Bourne Chair in Poetry, and Director of Poetry@Tech at Georgia Tech in the Ivan Allen College of Liberal Arts.  Kaminsky: " The Deaf don't believe in silence. Silence is an invention of the hearing". "When I lost my hearing, I began to see voices."

The cover design is by Kapo Ng. The cover art is by Gail Schneider. Questions are from the Ellenbogen reading guide linked above. What do you think of the book cover? Why is the ear bricked? Why do you think it is half black/half white? If you could design it differently, how would you design it?

Deaf Republic is a novel, play, and poetry (59), a genre-breaking work. It is about a fictional town, Vasenka (a police state with an authoritarian regime).

A Deaf boy, Petya,  attends a puppet show in the town's square. Soldiers overtake the area, and the audience becomes quiet, except for Petya, who laughs at the puppets' movements. The soldiers murder him. After the murder, the town 'becomes' 'Deaf' and uses sign language to communicate with each other. Deafness is used as a resistance tool. The soldiers label Deaf as a disease that must be eradicated and the Deaf must be quarantined.

The women puppeteers have an important role in this work by distracting soldiers, and later killing them at the puppet theater. The theater is also an empowering place where sign language is taught to others.

The book opens up with a poem, "We Lived Happily During the War" which conveys the message that while atrocities occur in the world, people are indifferent. When the Russia-Ukraine war started, this poem was heavily quoted on social media.

There are layers of meanings regarding 'silence', here used as a protest against the government, and in other cases, denying or not speaking up against injustices as they occur.

Although the theme center on silence, the poems are full of sounds and use alliteration and consonants, particularly "s," "t," and "f" sounds Is there a purpose in adding these sounds? Does it add tension?  Some lines are not punctuated or have dashes. What feeling does it convey? There are sonic echoes in some of the poems that resonate with events in the town.  Analyze how the poems are structured throughout the work, the use of spacing, and other poetic devices. How do they add to the work's tone, message, and overall artistry?

Disability (Deaf and silence) versus Ability (Hearing)---Is 'Deaf' a weakness or a strength? Is hearing a liability? Who is really 'Deaf', metaphorically? Deafness is treated as a disease to be eradicated by the soldiers. How is 'Deaf' used as an empowering tool and as a form of protection? When is it important to take a stand? Do you have the courage to do the right thing? What does this title mean? "Deafness, an Insurgency, Begins." The people refuse to hear and speak. Deafness is used as a 'barricade' within a wall of silence.

Silence can also mean cowardice, not doing anything such as watching the soldiers take away Alfonso. Why do the townspeople point to their ears when Gayla needs help, and Anushka cries? Why are they upset with her? In "Anonymous," when Momma Galya died, the people carried her coffin upside down. The townspeople have lost their lives, their city, and their voices. The townspeople stay quiet, like an audience.

What are some of the descriptions of silence, and how is it used throughout the work? The need for quiet when there are bombings. What is heard? What is said? What is unheard? What is unsaid? Do they have the right to speak freely?

Hands-used for communication through sign language helps them defend themselves against the soldiers. Sign language is a  peaceful way of expressing information.

Signage-how do the soldiers communicate with the town since they use sign language? What do the signs say? It is a way they can post orders, commands, and violent messages since they cannot communicate. They hang signs around the arrested people's necks. Gayla holds up a sign reading: "The people are deaf" after Petra is murdered.

Watching, Looking-how often do you see this throughout the work? Hands forming the sign for "the town watches" indicate fear. What are the implications of observing? Bearing witness?

Circle-how often do you see this image in the work? What does a circle convey? Protective barricade?

Puppeteers-puppets-hanging puppets from the windows-- lifeless, symbolize victims the soldiers killed. The puppets imitate the movements and cries of the people and the soldiers.

The Stage-puppet show in the town square (like a set) is a theatre within a theatre. "Our country is a stage." What does that mean? How do people act or perform when threatened by soldiers? How do soldiers act? How is deafness a performance? Is theater a form of resistance?

Insurgency versus complacency, the bystander effect, and detachment. In "And Yet, on Some Nights," the country surrenders and pretend nothing happened. Some still teach their children to sign in case of another occupation. What is the danger of forgetting? Denial of what happened can make people vulnerable to war.

What are some social issues in America, Rochester, RIT, or the world that is of concern? Are we free and safe? Are innocent people killed? Should we remember? Should we prepare for threats in the future? Is war something we watch on our phones and tv screens? Do we participate in voyeurism? Do we speak up or remain silent?

The signs are a mix of various sign languages (Russian, Ukrainian, Belarusian, ASL) as seen in the book. Other signs are made up by the citizens. How do they sign the following concepts?  Do the signs make sense? Are they similar or different from ASL? Do the signs remind you of another meaning in ASL?

Alfonso and Sonya Borakbinski-a couple, and courageous figures,  have a baby girl, Anushka who represents hope and the future. They organize a puppet show and are puppeteers.

Petya-murdered Deaf boy (Alfonso and Sonya's cousin) influences the town to use sign language and point to their ears as they feign deafness when communicating with soldiers.

Write down some interesting quotes you found.

"Our country is a stage"

"Our hearing doesn’t weaken, but something silent in us strengthens"

"Our men, once frightened, bound to their beds, now stand up like human masts—
deafness passes through us like a police whistle."

"No one hears you" written on the soldiers' barracks

“I teach his children’s hands to make of anguish // a language - / see how deafness nails us into our bodies.”

"Each of us is a witness stand"

“What is silence? Something in the sky of us.”

"What We Cannot Hear"

Sonya "plays a lullaby that no one hears".

"The silence sounds like a match in water." There are other images of matches--do they symbolize insurgency?

Alfonso describes a child as "A quiet between two bombardments". When is this quote repeated in the work?

Why does Sonya say "On the day of my arrest I will be playing piano"?

"Above Blue Tin Roofs, Deafness" - what does this title mean?  Note the colors in the poem. What do the colors symbolize?

"Our silence stands up for us" -what did the townpeople cloak themselves in to protect themselves when Alfonso was taken away?

"the snow leaves the earth and falls straight up as it should—" Why would the snow go upwards not downwards?

"If God were put on trial, the townspeople say they would ask "why did you allow all this"  They would only hear an echo in response.

"Later, some will say none of this happened"

In "In a Time of Peace,", the speaker "cannot hear gunshots".