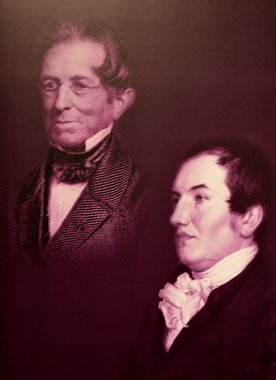 Use the Gallaudet Encyclopedia and The Sage Encyclopedia of Deaf Studies to find more information about Laurent Clerc and Thomas H. Gallaudet. They took a boat voyage on June 18, 1816, for 52 days to help found the American School for the Deaf (ASD) in 1817. While they were on the boat, Gallaudet taught Clerc written English and Clerc taught Gallaudet French Sign Language or Langue des Signes Française (LSF).

Clerc used LSF at ASD which influenced the development of American Sign Language (ASL). There are other influences on ASL, such as the signing Deaf and hearing community at Martha's Vineyard who used Martha Vineyard Sign Language (MVSL). This community migrated from Weald-Kent, England in the 17th century due to economic necessity and religious freedom. The Weald-Kent area used a regional dialect of British Sign Language (BSL) called Old Kentish Sign Language (OKSL) because there were Deaf members in the community due to genetic deafness. It is believed that this group brought OKSL to Martha Vineyard. Another possible influence is the presence of Native Americans on the island who might have influenced the MVSL variety as well.

The first full week in December is Clerc-Gallaudet week, thanks to the efforts of Alice Hagemeyer, a Deaf, retired librarian. Check out Alice's publication on Clerc and Gallaudet University. There is a recently published online publication (the link shows English version, and is also available in French) by Mireille Golaszewski (hearing Inspecteur général honoraire de l'Education nationale) and Christopher (NTID MSSE Deaf professor) who worked on a book about Laurent Clerc and Thomas H. Gallaudet and their influence on Deaf Education in the U.S. This was a unique collaboration between the French and American authors who published the book in French and English on the French consortium (that Mireille works for) website.  There was a recorded book talk webinar at RIT in December, the first international sign language webinar at NTID.