This guide discusses some Deaf technologies that DHH people used in the past and use today.
Permalink |  Email this Guide
https://infoguides.rit.edu/prf.php?account_id=43304
Last Updated: Oct 21, 2022 3:36 PM

. Most of the information here is from the Described and Captioned Media Program timeline. The TDI Directory also has a timeline related to captioning and you can view the Gallaudet Encyclopedia for background information. The Deaf community enjoyed silent films until the 'talkies' arrived with Edison's sound film invention in 1927. Emerson Romero (Deaf) created and spliced captions (words) between picture frames in 1947. There are different types of captions. Closed captions can be viewed on televisions and are optional-you can turn them on or off. Open captions are always on the screen and cannot be turned off. In 1958, Captioned Films for the Deaf provided captioned Hollywood films for Deaf people due to the passage of P.L. 85-905. Many Deaf clubs showed weekly captioned films.  In 1962, with P.L. 87-715 educational media started to be captioned for DHH students, and Deaf schools could participate in this free program. 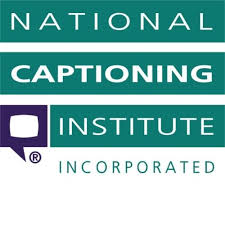 In 1971, Malcolm Norwood, considered the "father of closed captioning" became Chief of Media Services of the Captioned Films, in the U.S. Department of Education. The Captioning Center (now Media Access Group at WGBH) followed in 1972. That same year, The French Chef by Julia Child became the first open-captioned program on PBS. In 1973, ABC News offered open-captioned news at night on PBS stations for 9 years. In 1977, Line 21 was reserved by the FCC for closed captioning. The National Captioning Institute (NCI) developed in 1979 to caption TV programs. NCI created the first closed-captioned TV sets sold at Sears in 1980 and captioned videos became available. 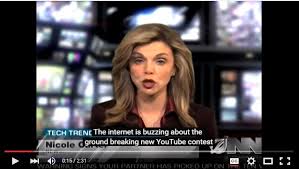 The image at left  is from the Caption Action 2: Web TV Closed Captioning blog. In 1990, the Decoder Circuitry Act passed and all televisions 13 inches and larger must have built-in decoders by 1993. The Americans with Disabilities Act also passed in 1990. In 1993, TRIPOD Captioned Films made open-captioned, first-run films available to local theaters for Deaf audiences.

The Captioned Media Program (CMP) (2001) started to make open-captioned movies and television programs available on the Internet through an agreement with movieflix.com. In 2002, CMP provided the streamed, educational opened captioned videos on the website. In 2006, All new television programs must be closed captioned in the USA. CMP becomes the Described and Captioned Media Program (DCMP), offering educational media for Deaf and also Blind individuals.

DCMP developed an interactive transcript tool where users could search the captions, click and view that video segment in 2014. DCMP also has a channel on Roku and video content can be embedded into a Content Management System. In 2015, DCMP developed iOS apps for Apple devices.

If you are interested in DIY captioning software, check out MacCaptions from Telestream.