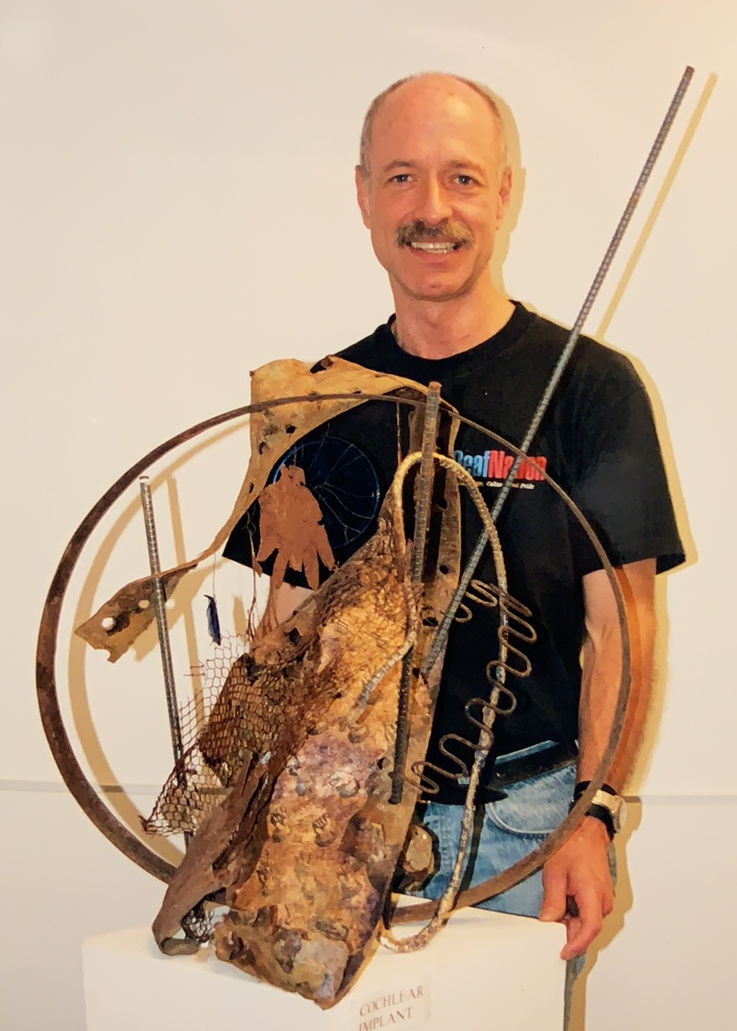 Guy Charles Wonder, Jr. passed away on November 27, 2020 at age 75 from Non-Hodgkin's lymphoma. He spent time in the hospital and in nursing care before going into hospice at home, surrounded by family and friends.

Guy attended Washington State School for the Deaf (WSD) in Vancouver, Washington. He then attended the National Technical Institute of the Deaf (NTID) in New York where he was part of the first class of graduates in 1971, earning his AAS degree in Textile Design.

For 20 years in New York City, he worked as a fine artist, model, fabric and wallpaper designer, and window display designer for Bloomingdale’s. His identity as a Deaf gay man influenced his artwork and focused on themes important to these communities. He created the iconic ILY (I Love You hand sign) symbol for apparel that has since become widely popular.

Guy was a founding member of a nationwide arts group called De’VIA (Deaf View, Image Art) started at the 1989 Deaf Way conference at Gallaudet University, Washington DC, where he was commissioned to create artwork for the conference and worked with students to create additional artworks, including the sculpture Hand Wave.

The next chapter of his life moved him across the country to California to be closer to his sister Jeannie and her family. He lived and worked in San Francisco and was an active participant in the arts community. In addition to his own mixed-media and sculpture work that he was making and selling from his studio, he designed and renovated local Bay Area houses.

Guy’s engagement with the community was vast: In the early 1990’s he was involved in many Deaf Media and Celebration: Deaf Artists and Performers events at the University of California, Berkeley; board member for Deaf Media and Deaf Counseling, Advocacy & Referral Agency (DCARA); and designed sets for SignRise Theatre. He also lectured and led tours and workshops at the Metropolitan Museum of Art in New York City, Oakland Museum of Art, and Yerba Buena Center for the Arts in San Francisco. He has served as an Artist-in-Residence at NTID, and at WSD Guy taught art to K-12 students and helped create permanent displays at WSD’s Lloyd Auditorium.

Guy’s final chapter brought him to Cathedral City, south of Palm Springs, CA, where he cared for his father until 2010. There, he worked as a set designer and builder for the Coachella Valley Repertory Theatre and continued creating art in his studio, including commissioned work.

Guy’s Journey, a virtual memorial on Zoom, will be on June 19, 2021. A Celebration of Guy’s Art, a virtual art exhibit by the Dyer Arts Center at NTID, will open on Guy’s birthday, June 26, 2021. Please contact Dyer Arts Center at dyerartscenter@gmail.com to register for either or both events, or for more information, starting June 1, 2021. Donations in Guy’s memory may be made to the following organizations: RIT/NTID Dyer Arts Center:or the Guy Charles Wonder, Jr. Memorial Arts Fund:.