See list of contributors at the end of the essay. Updated 15 March 2000.

In 1817, the American School for the Deaf was established by Thomas Hopkins Gallaudet and the deaf teacher, Laurent Clerc in Hartford, Connecticut. This same year, about 750 acres of land were incorporated as "Rochester," New York under a village charter. The land was still a wilderness; the only bridge across the Genesee River was at Avon and the main road from Utica to Buffalo was little traveled. A few settlers had established farms and mills in the 1790s and Governor De Witt Clinton had toured the region in July 1810. But by 1817 there was no opportunity for a deaf child to receive an education in this wilderness region. That year, Nancy Orr of Bath, New York was enrolled in the Hartford School. She was 23 years old and stayed 6 months. This is the earliest record of a deaf person from the Rochester region attending a formal school.

It was in 1812, only five years earlier, that National Rochester, Charles H. Carroll, and William Fitzhugh surveyed a hundred-acre tract for settlement under the name of "Rochester" (O'Reilly, 1838, p. 251). O'Reilly reports on how the War of 1812 retarded the progress of Rochester. He describes life in the Rochester wilderness, encounters with Native Americans, the formation of the first religious society (Presbyterian) in 1816, bear fights, and much more in his fascinating book.

As far as we know, the establishment of a small school in Palmyra, New York was probably associated with Rochester's oldest religious society, organized in August 1815, with 16 members, whose bishop, the Rev. Comfort Williams, was installed in January 1816 at the Presbytery of Geneva. We do know that it was at this Presbytery in 1822 (at that time under the Rev. Joseph Penney) that a demonstration was held of the progress of a small group of deaf children, educated by Daniel Scovel's son, Franklin Scovel. Scovel's school opened in Palmyra, New York on April 17, 1822. He was from the Hartford School.

Franklin Scovel was born deaf on February 20, 1799 in Orwell, Vermont to Daniel and Rebecca Scovel. He was enrolled at the American Asylum in Hartford on May 26, 1818 as the school's 46th student. In February, 1820 he left the school for a short time but returned around 1822. In all, he spent three years in Hartford and left for Rochester around the age of 23. Scovel was the oldest of seven children: Franklin, Champion, Laura, Ruby, Sylvia, Irene, and Harry. His sister Laura was also deaf.

Scovel married a hearing woman and had three children. His wife died and he later married Emeline Hanchett, a deaf woman who was also a pupil at the American Asylum. Emeline was born on March 19, 1809, in Salisbury, Connecticut. Her mother was Sally Hanchett and her father had died before her enrollment. Emeline was the school's 112th student and she entered the school on May 27, 1822 and left on May 3, 1828. She was deafened from spotted fever when about 4 or 5 years old.

Scovel's one-room school house for deaf children was announced in the Rochester Daily Telegraph, April 9, 1822. "This school will commence on the 17th day of April under the instruction of Mr. Franklin Scovel, who possesses the requisite qualifications, having been educated at the deaf and dumb Asylum in Hartford." The September 11, 1822 public exhibition of deaf children at Presbytery of Geneva appeared to be somewhat like the exhibitions held by Epee and Massieu in Europe. But by 1822, only two other schools for deaf children had been established since the American Asylum in Hartford. One was the New York School for the Deaf (Fanwood) in 1818 and the other was the Pennsylvania Institution in Philadelphia (1820). Thus, Scovel's attempt to start a school may have been the westernmost school to date. The following year, 1823, the Kentucky School for the Deaf opened in Danville. Scoville must have experienced a measure of success, despite the lack of resources in the wilderness of Palmyra. It was reported in the Rochester Daily Telegraph on September 24, 1822 that there was "...high satisfaction with the specimens of improvement in the scholars and of talent in the teacher."

[Note: In 1822, Palmyra had a larger population than Rochesterville. It was a boom town due to the opening of the Erie Canal.]

We can only wonder what would have happened if Scovel did not lose his first wife. Many schools for deaf children began later with such meager efforts. With three children, it is likely he closed the school in Palmyra and shortly after he returned to Connecticut, where a growing deaf community made him feel more comfortable. With no one in Palmyra able to use sign language to teach upon his departure, the education of deaf children in the Rochester area suffered a serious setback.

Rochester, New York's Deaf Heritage has close ties with the Fanwood school. Probably the earliest tie was with Samuel Mitchill, a hearing man who traveled throughout the region in the late 18th century. As early as 1788, Mitchill attended a treaty held with the Six Tribes at Fort Schuyler to discuss the purchase of land. Later, in 1824, he traveled along the Erie Canal at Rochester. In 1827, he wrote, "As to the village of Rochester, I became convinced, after a rapid survey, that it was destined to be the seat of much population and business" (O'Reilly, 1838, p. 416).

Mitchill later became New York's surgeon general, and founder of the New York Medical Repository. In the early 1800s, he had read letters published in newspapers by Francis Green, the father of a deaf boy, and by Francois Gard, a deaf friend of Laurent Clerc. With the support of De Witt Clinton, Mitchill and Samuel Akerly, another physician, established the New York Institution. After struggling for several years, they hired better teachers, including Harvey Prindle Peet and the deaf instructors Frederick Augustus Porter Barnard and Leon Vaisse, all from the Hartford school.

The first reports of sign language in the Rochester region were actually with Native Americans. For example, Mrs. Olive Boughton of Victor, New York, described an encounter with an Indian in her cabin who communicated in sign language to her that he wished to exchange salmon trout for bread she had made.

The next significant event in Rochester's Deaf Heritage appeared to occur in 1839. That year, John H. Thompson took a deaf girl, Jane Simons, to the Poor House. In the absence of antibiotics, many children and adults died young from disease. Orphans were often taken to the Poor House. At this early stage of our research, little is known about Jane Simons or Mr. Thompson.

We also know that in 1841, Emily and Gertrude Johnson, sisters from Lima, New York, enrolled at the Hartford School.

It was in August 1844 that Harvey Prindle Peet from the New York School (Fanwood) came to visit Rochester to hold an exhibition of pupils under his instruction. The Scovel school had closed many years earlier. Peet's exhibition was held at Washington Street Church. Perhaps it was this demonstration of the successful instruction of deaf children at Fanwood that brought Jane Simons to the school in New York City. Six years later, in 1852, her letter to John H. Thomson was published in Rochester Daily Democrat (January 28, 1852), which shows an adequate mastery of reading and writing.

Along with Jane Simons, several other Rochester deaf children were attending the Fanwood school in 1852. Two of them died from fever that year. Mary Ann Smith was an orphan girl from Rochester, Monroe County. Little is known about her. Much more is known about Cornelia Lathrop.

Cornelia Lathrop and the First Church for the Deaf

Probably the most notable young deaf pupil during this period was Cornelia Lathrop.

The grave of this deaf woman lies not far from the tombs of Frederick Douglass and Susan B. Anthony in Rochester's Mount Hope Cemetery. Cornelia died at the age of 16. The Reverend Thomas Gallaudet, elder son of Thomas Hopkins Gallaudet, was a friend of the Lathrop family. Gallaudet was a teacher at the New York Institution (Fanwood) with Harvey Prindle Peet.

When Cornelia became ill, her family moved temporarily from Rochester to New York City to be near her. Rev. Gallaudet visited her often. On her deathbed, she was informed by Gallaudet that she would not live. Her religious spirit and acceptance of her death inspired Gallaudet to establish St. Ann's Church in New York City a few months after Cornelia's death.

The Rochester School for the Deaf

Mr. and Mrs. Gilbert H. Perkins of Rochester, New York had a deaf daughter, Carolyn Perkins, born on July 24, 1868. Carolyn was first tutored by Mary H. True from Bethel, Maine. [Miss True had met Alexander Graham Bell when they were both teaching at the Boston School for Deaf Mutes and she suggested that Professor Bell give Mabel private lessons) .

Nodine was engaged to Zenas F. Westervelt, who was a teacher at Fanwood. Within a short time, Westervelt surveyed Western New York and found 112 deaf children not in school. Encouraged by this, Carolyn Erickson Perkins and Gilman H. Perkins proposed that a school be established in Rochester. "But what can be done for the other children in the area who are similarly afflicted? If only there were a school for them, one that Carolyn could attend also..."
The first meeting was attended by the mayor of Rochester, the Rev. Gallaudet, and other important personalities. It was resolved to found a school which would be known as the "Western New York Institution for Deaf-Mutes". This school was established in 1876. By1919, the Western New York Institution changed its name to "Rochester School for the Deaf"

At RSD, Zenas Westervelt introduced "The Great Innovation", which became universally known as "The Rochester Method."

Herald article about a class studying engines at the Mechanics Institute (1911). Courtesy of Harry Lang 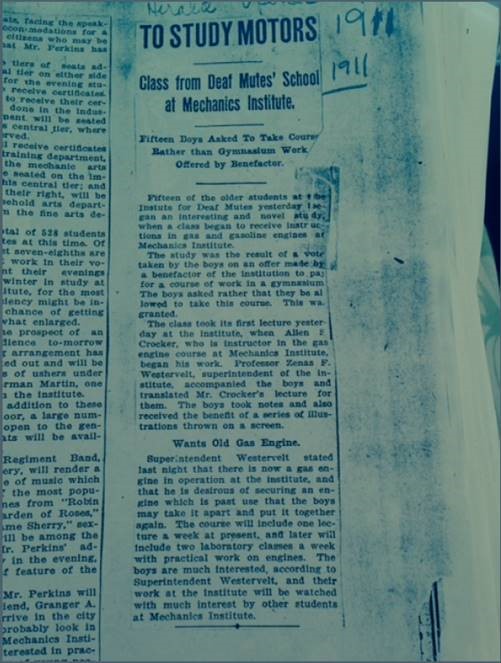 President of the Rochester Athenaeum (today as Rochester Institute of Technology); Mayor of Rochester, 1874-1875 in 1876 with Rev Thomas Gallaudet, the eldest son of deaf-mute advocacy pioneer Thomas Hopkins Gallaudet, helped establish the Western New York Institution for Deaf Mutes, which Alexander Graham Bell described as the best disciplined and most admirably conducted institute in the country; served as Vice President and President of the Institution for many years, associated with area financial institutions, including the Monroe County Savings Bank where he served on the Board of Trustees during the 1890s.