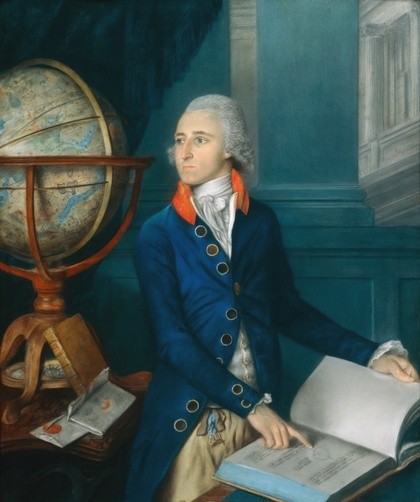 The picture on the left is in the Public Domain. John Goodricke (1764-1786) was a British astronomer. The Royal Society of London awarded him the Copley medal for his work related to the Algol star when he was 19 years old.  He lived until he was 21 years old after being elected a Fellow in the Royal Society. Goodricke College at the University of York is named for him. There is an asteroid 3116 Goodricke.

Goodricke attended the Braidwood School for Deaf students and later attended the Warrington Academy, a hearing school. His York neighbor was Nathaniel Pigott who was an amateur astronomer. Pigott used a model of Herschel's observatory and was a mentor to Goodricke. Both he and Goodricke shared their observations of the night sky and wrote in their journals. Goodricke was introduced to variable stars, including Algol, an unusual star, called "the demon star".

Using a telescope, Goodricke observed planets that Herschel had discovered such as Uranus which was thought to be a comet. Studying the Algol star, he noticed that it changed brightness quickly and recorded this in his journal. This discovery was discussed with Pigott and they continued to study the star. Pigott shared their findings with other astronomers, including Herschel.

Goodricke and Herschel corresponded for years about Algol, the Milky Way galaxy, and other astronomical topics. Continuing his studies of Algol Goodricke published his findings on Algol regarding its periodicity, observations of spots, and speculation that the Algol had a companion star that eclipsed itself regularly, and that was the cause of the variability in brightness. Other astronomers sent the Royal Society confirmation of Goodricke's discovery of Algol's periodicity. A century later, astronomer Hermann Vogel verified that Algol was a binary star. Goodricke continued his studies and discovered the variation of the stars Beta Lyrae and Delta Cephei.