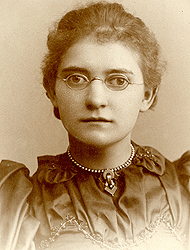 (1870-1958) The second sole female graduate, she graduated from Gallaudet College (1893), presenting a valedictorian speech, "The Intellect of Women" at the Gallaudet commencement. Often, but erroneously, called Gallaudet's first female graduate (the actual first was Alto May Lowman Kavanaugh, q.v., in 1892). She was the first Deaf woman to receive a Bachelor of Arts degree. In addition, she published several poems, including a book, Overflow Verses, contributed articles to Deaf periodicals, and edited a Seattle Deaf newspaper. She taught at the Minnesota School for the Deaf for 6 years before her marriage to Olof Hanson (q.v.) Hanson Plaza and Dining Hall at Gallaudet University is named in her honor.

“You asked me how I stand on the suffrage question.  I live in a state where women vote, and for two years now I have registered and voted faithfully.  Having a good comrade in my husband, we have derived enjoyment from discussing politics and going together to the polls.  A year ago, when a very unfit man ran for mayor and managed to get many votes, it was a satisfaction to know that the votes of the women of Seattle unquestionably downed him. 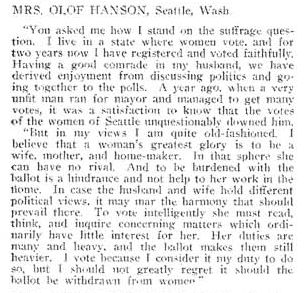 “But in my views I am quite old-fashioned.  I believe that a woman’s greatest glory is to be a wife, mother, and home-maker.  In that sphere she can have no rival.  And to be burdened with the ballot is a hindrance and not help to her work in the home.  In case the husband and wife hold different political views, it may mar the harmony that should prevail there.  To vote intelligently she must read, think, and inquire concerning matters which ordinarily have little interest for her.  Her duties are many and heavy, and the ballot makes them still heavier.  I vote because I consider it my duty to do so, but I should not greatly regret it should the ballot be withdrawn from women.”

"Civilization is too far advanced not to acknowledge the justice of woman's cause. She herself is too strongly impelled by a noble hunger for something than she has known, too highly inspired by the vista of the glorious future, not to rise with determination and might and move on till all barriers crumble and fall... I resented that there might be any question of the right, the God given right, of my sisters and myself to take our places in the sun."