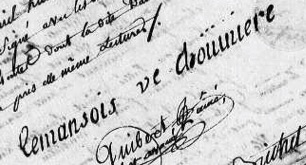 Orphaned early in her life, her uncle took over her care. Due to coming from an aristocratic background, she obtained an outstanding education.

Madeleine fought to choose her marriage partner, despite her uncle's opposition. At age 25 (in 1776), she plans a secret wedding, but the courts will not allow her to marry due to laws forbidding the marriage of the deaf without parental consent. She fought for the right to marry despite being deaf at the highest court, the Parliament of Paris, and won. Since then, the deaf has the right to marry whom they choose (Cantin, Yann, 2019).

English transcript of French video below.