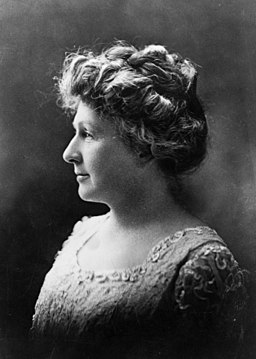 (1863-1941). "Deaf Maria Mitchell". She was a member of the National Women's Party and was a suffragist. “If women can organize the sky we can organize the vote.” A pioneer in the astronomy field, her interest in constellations was nurtured by her mother. She attended Wellesley College where she studied the sciences and mathematics and graduated as valedictorian. She later took up photography studies, taught at Wellesley, and pursued astronomy studies at Radcliffe. She was hired as an assistant at the Harvard College Observatory, one of two Deaf women (Henrietta Swan Leavitt) where she classified more than 350,000 stars, developed a stellar classification system to describe them, discovered new stars and novas, and curated astronomical photographs. She won many honors, was the first woman Dean of Astronomers, and the first woman to get an honorary degree from Oxford University. A lunar crater and an asteroid are named for her.