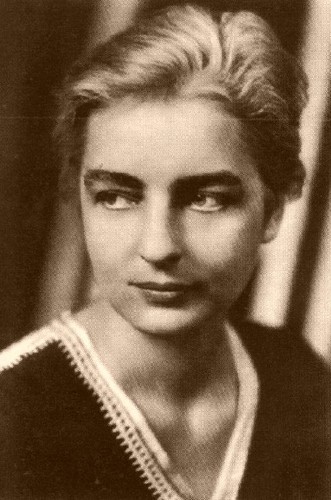 Ruth grew up in Norwich, on a family farm in upstate NY.  As a child, she experienced progressive deafness which was discovered when she entered school. She and her sister, Sarah, won scholarships to St. Margaret’s School for Girls, in Buffalo, NY which prepared them for admittance to Vassar College in 1905.  Ruth majored in English Literature and continued to pursue her love of writing poetry and stories using different pseudonyms, such as Anne Singleton.

In 1919, a turning point in her life occurred when she entered graduate school and studied with “the Father of Anthropology”, Franz Boas, at Columbia University. He became her mentor and she completed her doctorate in 1923, "The Concept of the Guardian Spirit in North America". Her early career focused on studies of various Native American tribes. She collected Native Americans’ folklore stories and published studies. Ruth became Boas’s assistant and was editor of the Journal of American Folklore.

Another turning point occurred when Ruth Benedict taught her first anthropology course at Barnard College in 1922 and met Margaret Mead, her student. They developed a life-long close relationship, sharing teaching responsibilities, and working on projects together. Ruth could not rely on audiotapes due to her deafness. Due to these barriers, she focused on the VISUAL aspects of culture, such as costumes, architecture, dance, painting, and literature, and a sub-field, visual anthropology was born. Margaret Mead used photography and film to document her work, influenced by Ruth’s visual perspective. Among her many accomplishments, she was the first full woman professor in the U.S.

Ruth Benedict posited a theory that societies had cultures and “personalities”.  She is known for her studies of the disenfranchised and deviance within cultures and the influence a person’s culture had on his goals and life direction, particularly those who went against the cultural norms. Margaret Mead and Ruth Benedict were among the first anthropologists to conduct gender and sexuality studies such as gay culture. She published a book, Patterns of Culture, a best-selling seminal work that was used as a major textbook for many introductory anthropology classes.

In 1941, she became a founding member of The Institute for Intercultural Studies which led to her next position. Ruth worked for the Office of War Information to conduct research on Japanese culture from a distance.  Franklin D. Roosevelt used her work and advice when he worked with Japan after WW II. She published the Chrysanthemum and the Sword in 1946.

Ruth was committed to social causes, opposed racism, and embraced tolerance. She wrote a powerful book Race: Science and Politics. She was a brilliant leading anthropologist of her time and she interweaved various disciplines such as sociology, psychology, philosophy, and the humanities to create unique and complex perspectives on cultural anthropology.

Ruth Fulton Benedict. (1995).  In H. Lang (with B. Meath-Lang), Deaf persons in the arts and sciences. Westport: Greenwood Press.