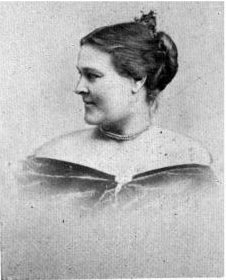 (1840-1923) Born in Somerset County, MD; the family moved to St. Louis when she was very young; deafened at age 11 by meningitis; graduated from the Missouri School for the deaf. Began a career as a reporter and an author of poems and essays in St. Louis, writing under the pseudonym of "Howard Glyndon". During the American Civil War, went to Washington as a reporter for the St. Louis Republican and interviewed Abraham Lincoln. Married Edward W. Searing of Sherwood, NY, in the 1870s; in 1886, moved to Santa Cruz, CA; died at San Mateo, CA. The town of Glyndon, MN, is named in her honor.

"As for myself, I believe I am called upon to sign this petition in conformation with that
clause of our constitution which recognizes the equal rights of all human beings of
lawful age and sound mind without regard to sex, color, or social condition. Having
decided that black people do not belong to white ones, why not go a step farther and
decide that women do not belong to men unless the proprietorship be recognized as
mutual?" (https://archive.org/stream/JulAug95/Jul-Aug95_djvu.txt)