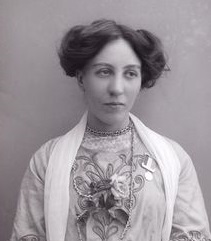 (1881-1972) She was a militant British suffragette from Nottingham. She joined the Women's Social and Political Union (WSPU) in 1907. After being involved with a  WSPU protest, she was the second woman to be arrested and imprisoned. She was released from prison after a hunger strike. She also joined the Women's Freedom League.

“Votes for Women” will not be won by drawing-room chatter. It has got to be fought for in the market-places, and if we don’t fight for it, no-one else will… The open-air meeting is a symbol of the principles, the method, and the spirit of the most vigorous movement towards Woman Suffrage in England today. The Suffragettes have come out of the drawing-room, the study and the debating hall, and the committee rooms of Members of Parliament, to appeal to the real sovereign power of the country”.